Skip to main content
Zowe Version 2.0 is now available! Read about the new features and fixes in this release. 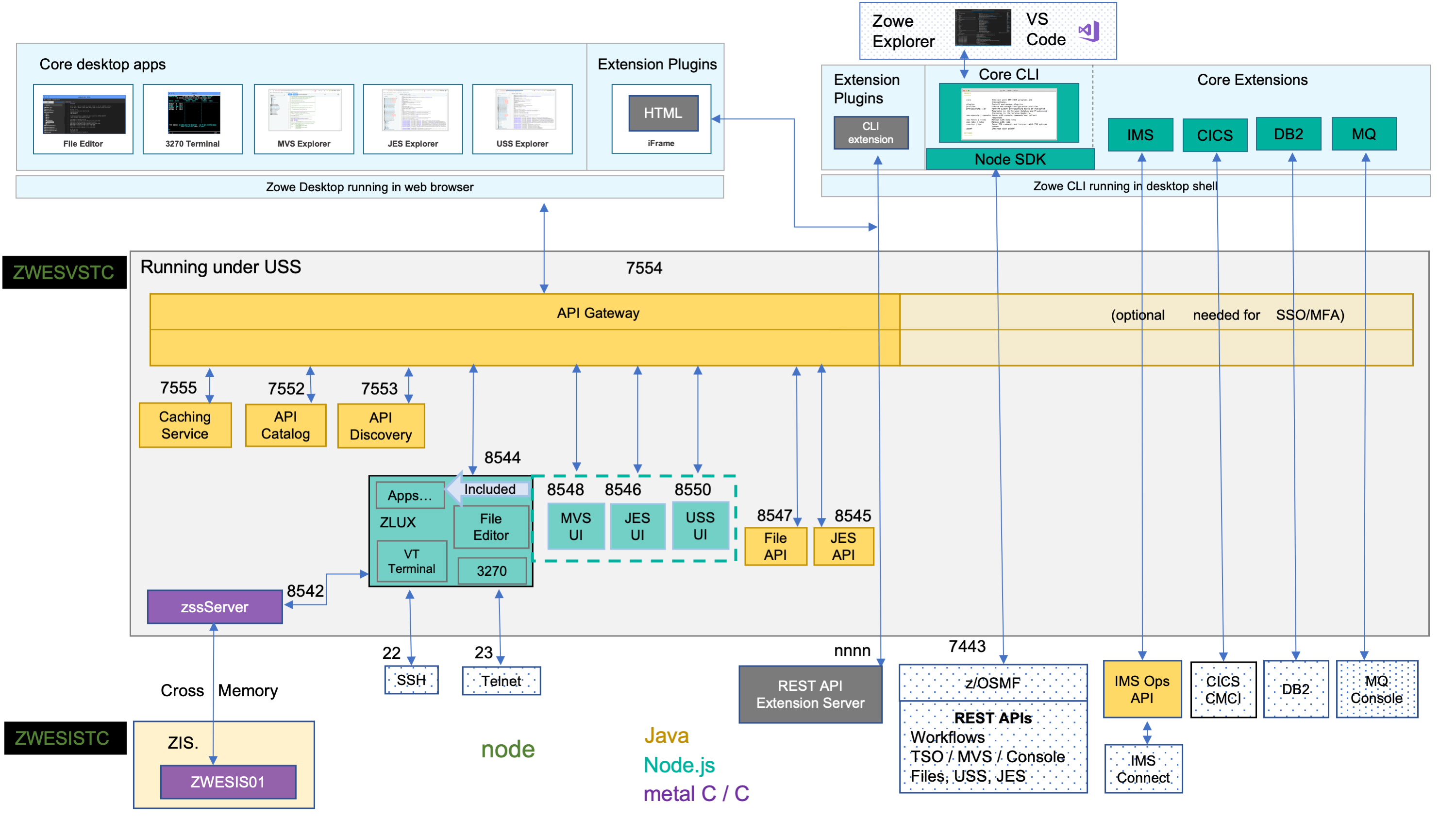 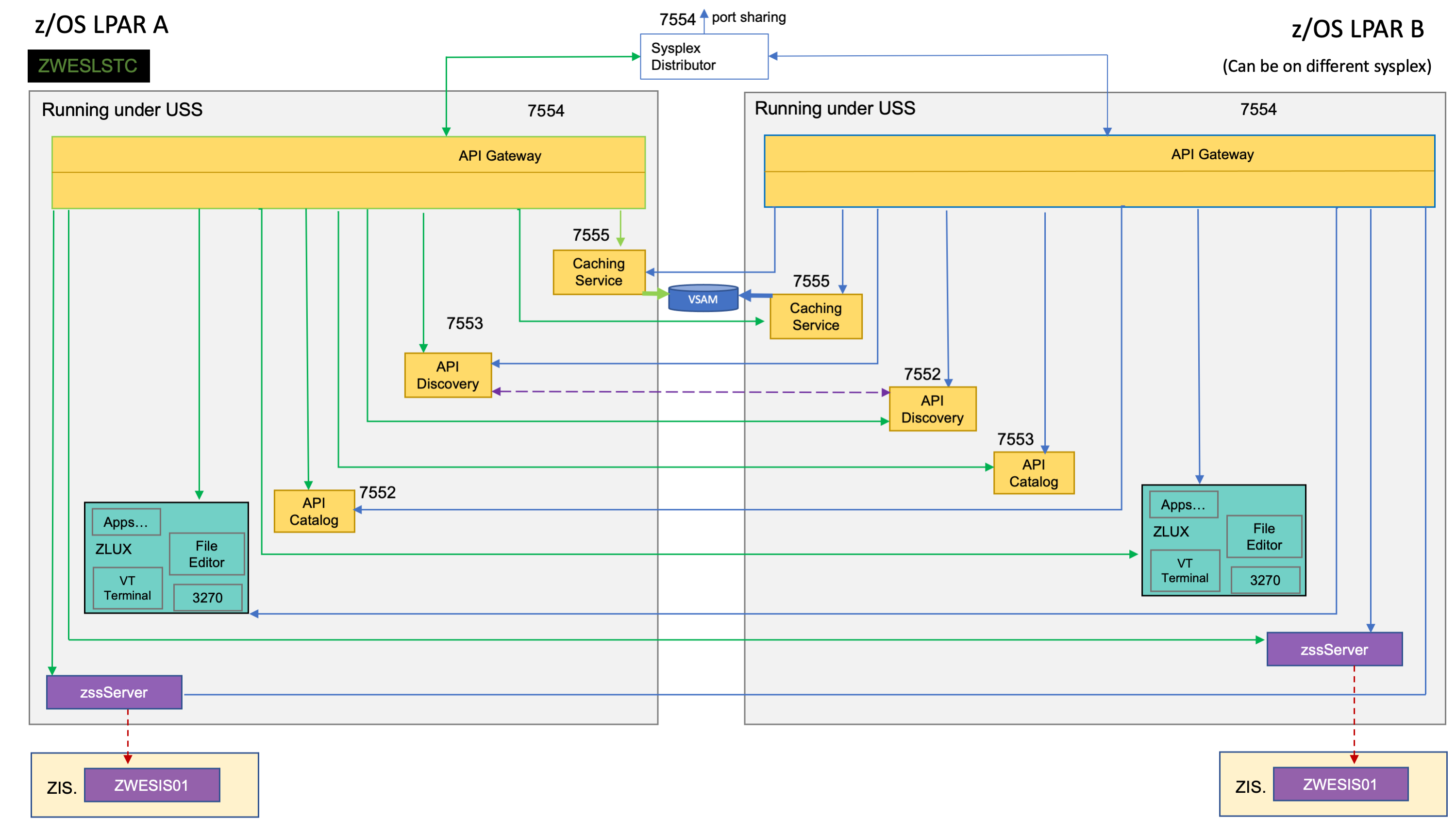 The caching services for each Zowe instance, whether on the same LPAR, or distributed across the sysplex, are connected to each other by the same shared VSMA file. This arrangement allows state sharing so that each instance behaves similarly to the user irrespective of where their request is routed.

For simplification of the diagram above, the Zowe Explorer API and UI servers are not shown as being started. If the user defines Zowe Explorer API and UI servers to be started in the zowe.yaml configuration file, these servers behave the same as the servers illustrated. In other words, these services register to their API discovery server which then communicates with other discovery servers on other Zowe instances on either the same or other LPARs. The API traffic received by any API gateway on any Zowe instance is routed to any of the Zowe Explorer API or UI components that are available. 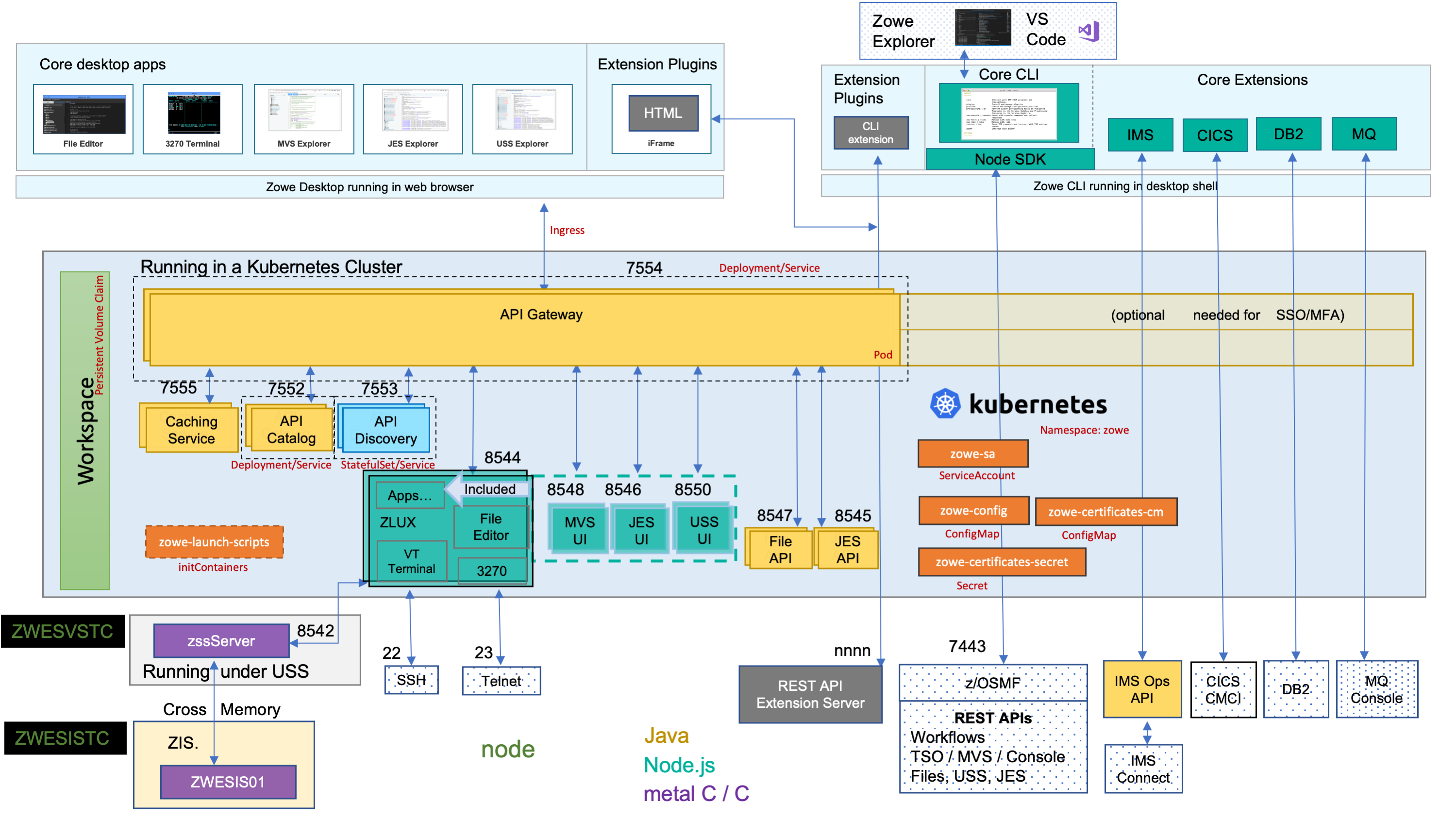 The components on z/OS run under the Zowe started task ZWESVSTC, which has its own user ID ZWESVUSR and includes a number of servers each with their own address space. The ZWESVSTC started task has a STDOUT file that includes log and trace information for its servers. Server error messages write to STDERR. For problem determination, see Troubleshooting.

The following diagram illustrates the difference in locations of Zowe components when using Docker as opposed to running all components on z/OS. 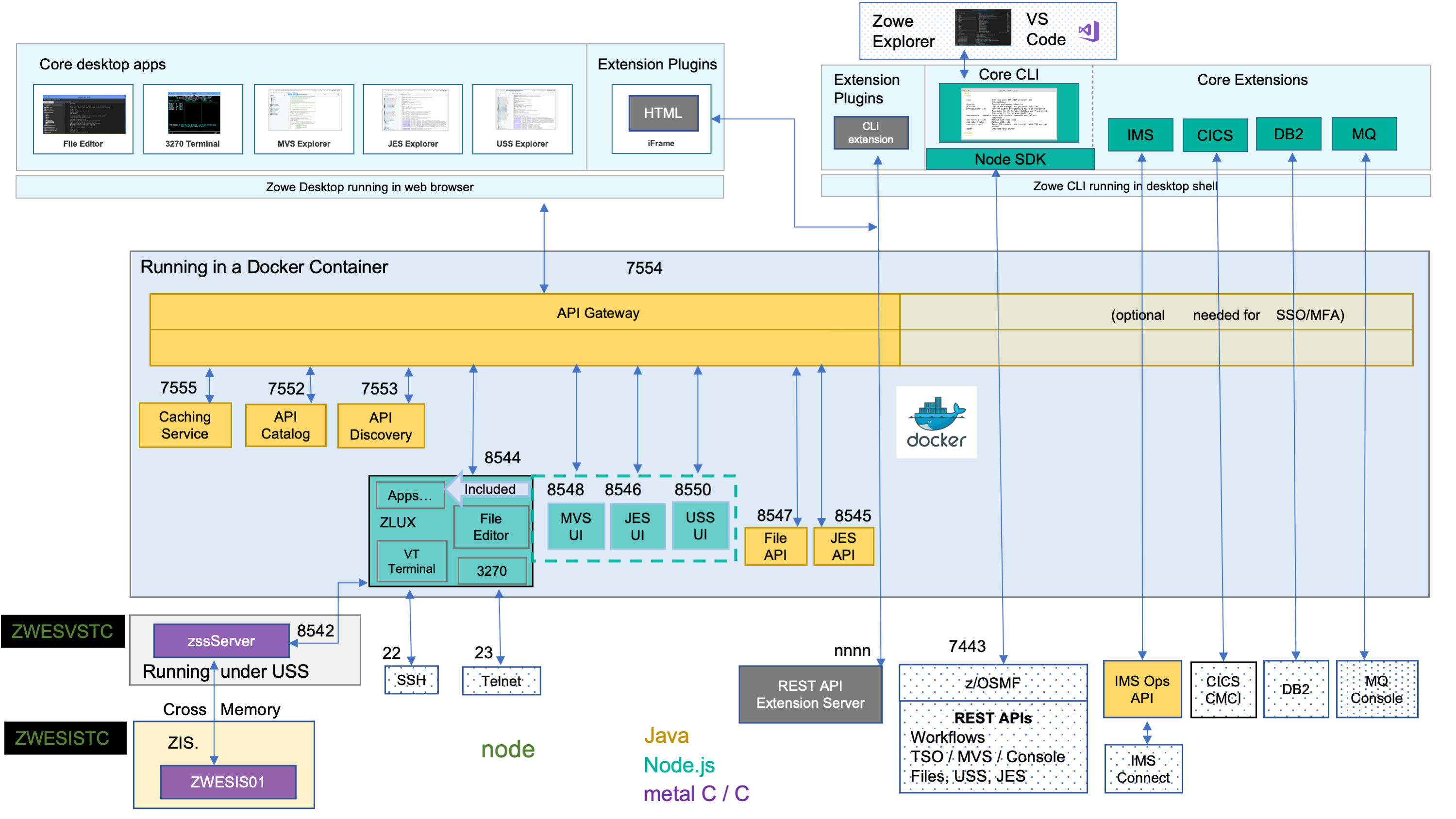 The components on z/OS run under the Zowe started task ZWESVSTC, which has its own user ID ZWESVUSR and includes a number of servers each with their own address space. The ZWESVSTC started task has a STDOUT file that includes log and trace information for its servers. Server error messages write to STDERR. For problem determination, see Troubleshooting.

When Docker is used, server components not running on z/OS instead run in a Linux environment provided via Docker container technology. The servers run as processes within the container which log to STDOUT and STDERR of that container. Some components also write to the log directory of the Zowe instance. 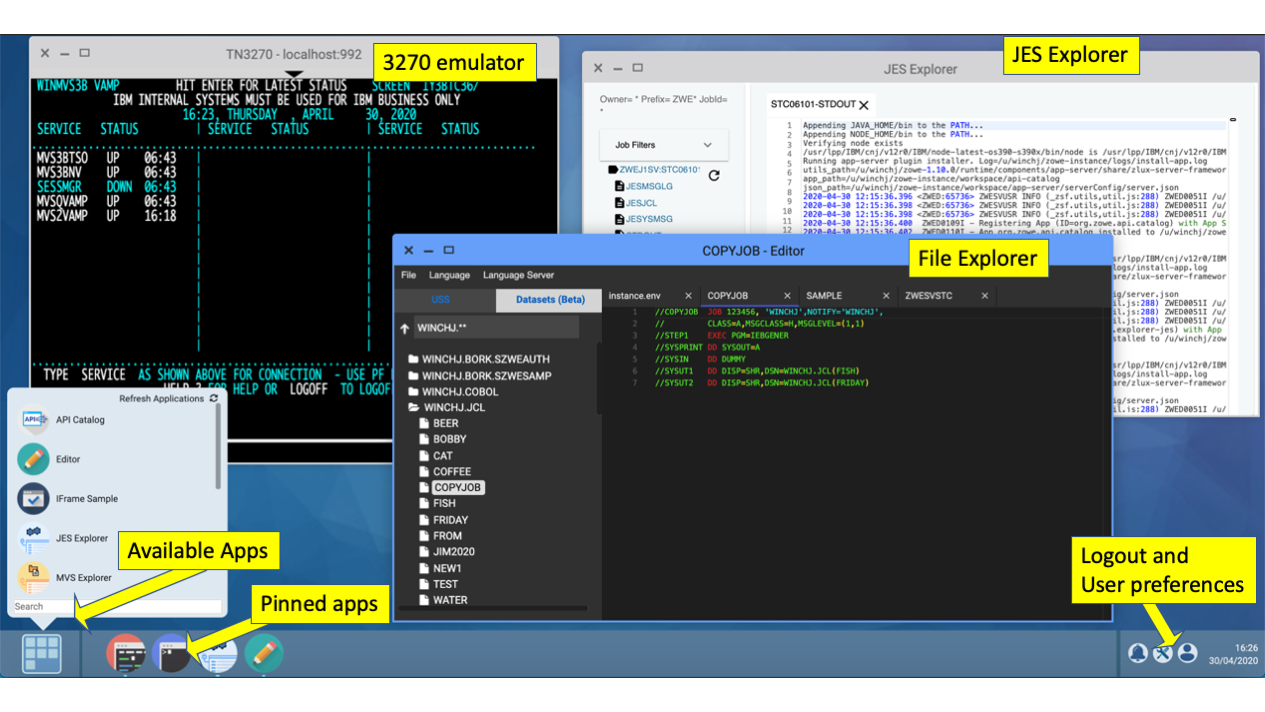 The Zowe desktop delegates a number of its services to the ZSS server which it accesses through the http port 8542. ZSS is written in C and has native calls to z/OS to provide its services. ZSS logs write to STDOUT and STDERR for capture into job logs, but also as a file into <INSTANCE_DIR>/logs/zssServer-yyyy-mm-dd-hh-mm.log. 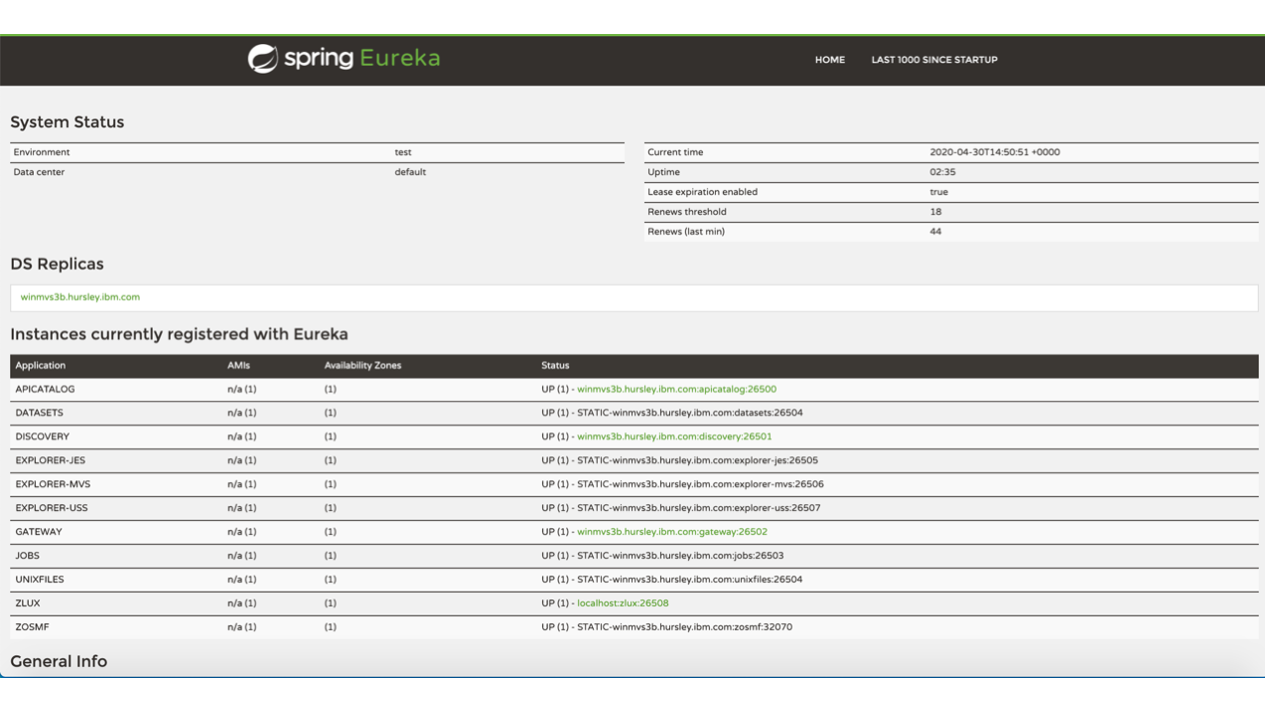 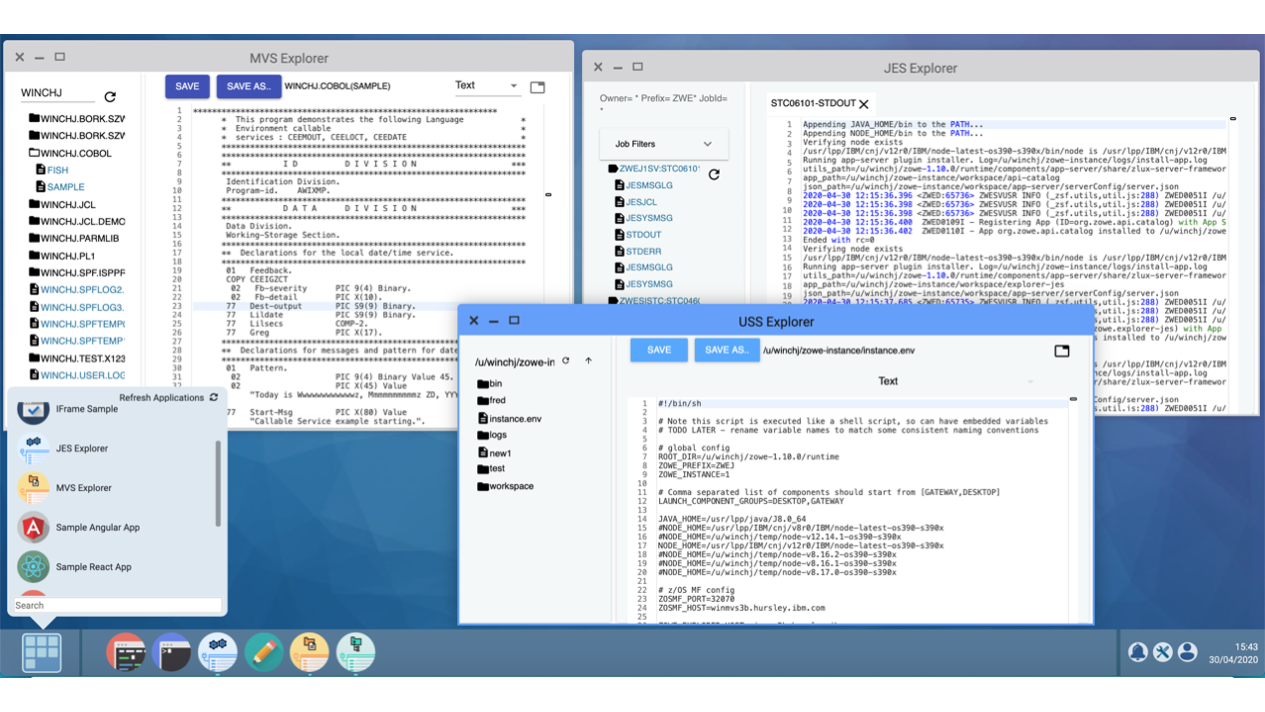 The Cross Memory server is a low-level privileged server for managing mainframe data securely. For security reasons, it is not an HTTP server. Instead, this server has a trust relationship with ZSS. Other Zowe components can work through ZSS in order to handle z/OS data that would otherwise be unavailable or insecure to access from higher-level languages and software.

Unlike all of the servers described above which run under the ZWESVSTC started task as address spaces for USS processes, the Cross Memory server has its own separate started task ZWESISTC and its own user ID ZWESIUSR that runs the program ZWESIS01.