This is documentation for Zowe Docs v1.27.x LTS.

How to check if ZWESVSTC startup is successful#

The ZWESVSTC started task on z/OS brings up a number of address spaces. There is no single Zowe has launched and is ready to run message as the sequence of address spaces initialization is environment-dependent, although the message ID ZWED0021I is typically the last one that is logged. More details on each subsystem and their startup messages are described in the following sections.

To learn more about the Zowe components and their role, see Zowe Architecture. It is possible to configure Zowe to bring up only a subset of its components by using the LAUNCH_COMPONENT_GROUPS variable in the instance.env file. See Component Groups for more information.

To monitor ZWESVSTC to check whether each component has launched successfully, you can use one of the following ways:

The API Mediation Layer has three address spaces: API Catalog ZWE1AC, API Gateway ZWE1AG, and API Discovery ZWE1AD. These might have been changed from their defaults. For more information, see Address space names.

To check whether the API mediation layer is fully initialized, you can look for the ZWEAM000I message. Each component writes a successful startup message ZWEAM000I to the JES as shown below. The message also indicates the CPU of seconds spent. Check that each address space has written this message.

As well as looking for ZWEAM00I in the JES log, you can also log in to the gateway homepage and check the service status indicator. If there is a red or yellow tick beside one of its three services, the components are still starting.

When all services are fully initialized, there will be three green ticks. 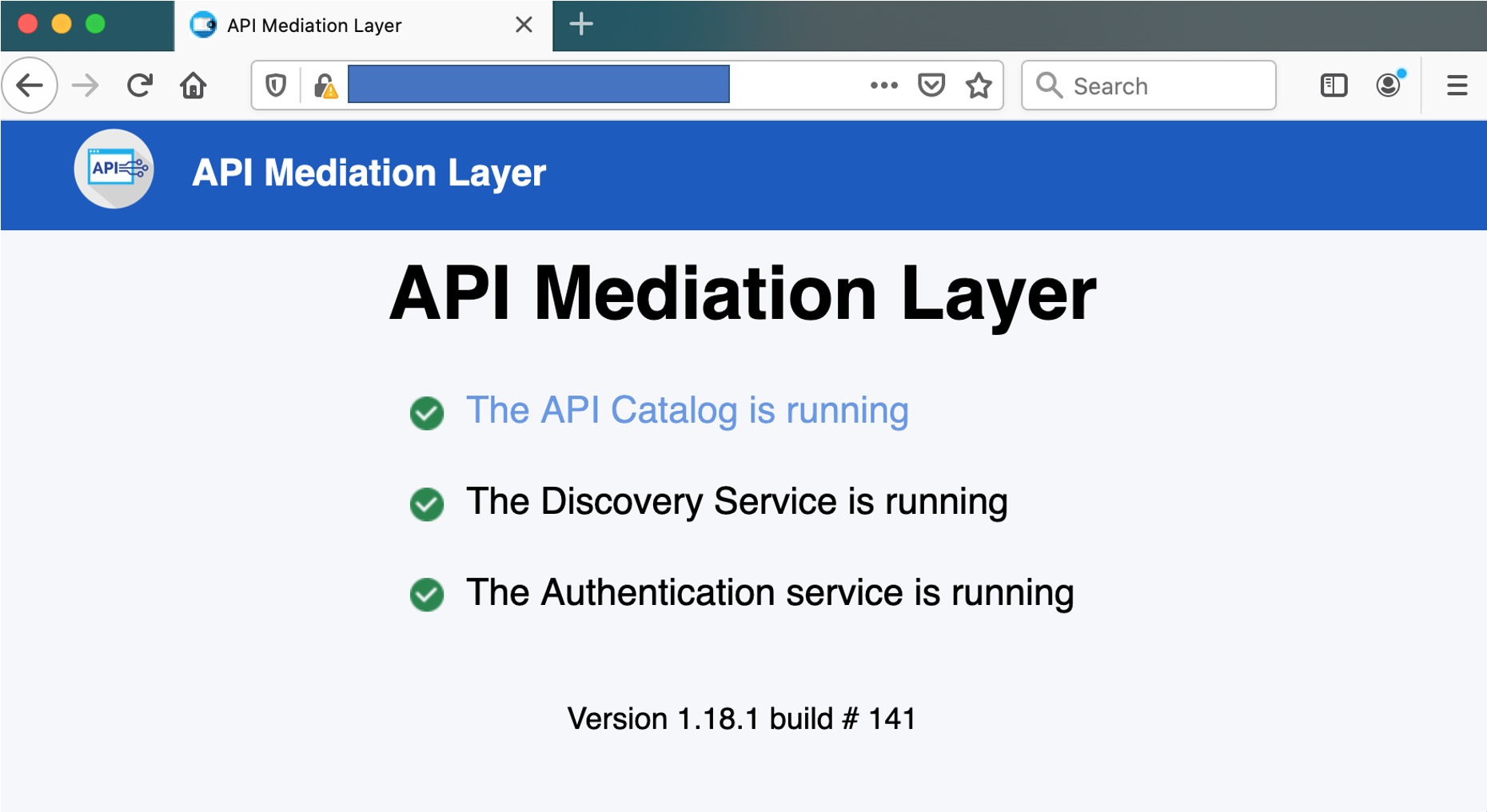 Check the startup of Zowe Desktop#

The Zowe Desktop address space is named ZWE1DS1. During its initialization process, the desktop loads its plug-ins and writes a message ZWED0031I when it is completed.

The ZWED0031I message includes a count of the number of loaded plug-ins as well as the total number of plug-ins, for example Plugins successfully loaded: 100% (21/21). A failed plug-in load will not abort the launch of the desktop.

When the Zowe desktop and the API Gateway are both started in a launch configuration, it will register itself with the API Gateway after the Zowe desktop has started. This step must be completed before a user is able to successfully log in, as the API Mediation layer is used as the backing authentication service. The message that is written to indicate that the registration has been successful is ZWED0021I, for example

If you try to log into the Zowe desktop too early before the Eureka client registration has occurred you may get an Authentication failed message on the login page because the APIML handshake is incomplete. If this occurs wait for the registration to be complete as indiciated by the ZWED0021I message.

Check the startup of Zowe File and Jobs API servers#

The zssServer is used for secure services for the Zowe desktop.

The zssServer will register itself with the cross memory server running under the address space ZWESISTC. You can use the attach message ID ZWES1014I to check that this has occurred successfully. If this message contains a nonzero return code in the cmsRC= value, then a failure occurred. For more information on how to diagnose these, see ZSS server unable to communicate with X-MEM.

When you run zowe-start.sh from a unix shell path <zowe-instance-directory>/bin, you encounter the following error:

This can be because the value of ROOT_DIR in the <zowe-instance-directory>/instance.env file is pointing to an invalid Zowe runtime. This can occur in scenarios where the Zowe runtime directory was removed during an upgrade of a convenience build, and the instance.env file's ROOT_DIR value was not updated to point to the new fully qualified path for the new Zowe runtime.

When you start ZWESVSTC started task, either by running the zowe-start.sh script or by launching the started task directly, you encounter the following error in the log:

You will also encounter the following messages in the SYSLOG:

This problem occurs when the maximum number of BPXAS instances have been reached.

This problem will only occur with Zowe drivers prior to v1.10 and has been resolved in v1.10 where the zowe-configure-instance.sh script will report error if it detects the -c argument because the installation directory location is an existing Zowe runtime directory.

Errors caused when running the Zowe desktop with node 8.16.1#

When you start the ZWESVSTC started task, you encounter the following error messages:

This problem occurs when you use Node.js v8.16.1 which is not supported on Zowe. There is a known issue with node.js v8.16.1 and Zowe desktop encoding. Use a supported version of Node.js instead. For more information, see Supported Node.js versions.

Cannot start Zowe and UNIX commands not found with FSUM7351#

When you start the ZWESVSTC started task, you might encounter the following error message:

Check that /bin is part on your PATH. Do echo $PATH to check. If it is missing, make sure that it is appended to PATH in your profile, for example, in /etc/profile/.

Various warnings show when connecting Zowe with another domain#

The above warnings and errors will also show when you plan to use Zowe with multiple domain names.

You can take the following steps: