This is documentation for Zowe Docs v2.3.x LTS.

When you install the Zowe™ server components on z/OS, a utility called configmgr or "Configuration Manager" is bundled within. It can be used directly in a few ways, or leveraged by the zwe command to empower it with several abilities and even performance enhancements.

Starting in Zowe version 2.3, the zwe command can use configmgr to gain several abilities and even performance enhancements. This is designed to be non-disruptive, with no changes needed to Zowe Components that are v2 conformant. The biggest change is that enabling Configuration Manager mode enforces strict validation of Zowe configuration. This is helpful to ensure there's no configuration problems and even helps pinpoint issues, but if you previously had silent issues in your configuration, enabling this may reveal them.

Configuration Manager will not let Zowe servers start unless the configuration passes validation when checking it against the Zowe configuration schema. This gives a degree of assurance that the servers will not encounter issues due to typographical errors or missing required fields. It also avoids silent errors where a field might be an integer rather than a string.

When a validation error occurs, the command you ran will end with output that shows what and where the error was.

In the example, the certificate type PCKS12 does not exist. It is a typo. Without schema validation, the servers might start and then crash due to the typo.

With the schema file, you can see that there are only two choices for certificate types:

The type can either be PKCS12 or JCERACFKS. This allows you to not only detect this error but also see the options available.

When zwe runs and fails schema validation due to the "PCKS12" typo, it will print out the following message:

This output shows that type has an issue. You can read the enum to see the choices before restarting Zowe.

Zowe now publishes these schema files so that you can see all the configuration properties that are possible in Zowe, see how they have changed between versions, and see what values are valid for them. Below is a list of some of these schemas:

From the GitHub links above, if you want to see changes between versions, you can compare by the GitHub tags.

When zwe is using Configuration Manager, the CONFIG= parameter in the z/OS ZWESLSTC JCL and the --config parameter in any zwe command that supports --configmgr can take a list of YAML file locations as an alternative to the backward-compatible single YAML file used in prior Zowe versions.

When using a single unix file, the syntax is just the path to the file, such as CONFIG=/my/zowe.yaml. However, when using multiple files, you must use the syntax FILE(file1):FILE(file2):... where each file is surrounded with FILE() and files are separated by the colon : character. The use of FILE() will allow Zowe to support other types of storage in the future. An example of using multiple configuration files would be as follows:

Each file in the list you provide must adhere to the same Zowe configuration schema, but the contents can be any subset you want per file. Zowe will merge together the contents of all the files into one unified configuration, so the collection of files must result in a configuration which is valid against the Zowe schema.

Schema validation occurs upon the merged result, not the individual files. There are a few reasons you may want to split your Zowe configuration into multiple files, such as:

Note: When specifying many files, you may reach the line length limit in your STC JCL. The default JCL contains _CEE_ENVFILE_CONTINUATION=\ to allow you to continue the CONFIG parameter to multiple lines. An example of this is as follows:

When you use multiple files, Zowe constructs the unified configuration by having the files listed on the left override the values of files to their right in the list. This means the left-most file's values take priority, and the right-most file should be treated as a set of defaults. Here is an example of Splitting configuration into multiple files: 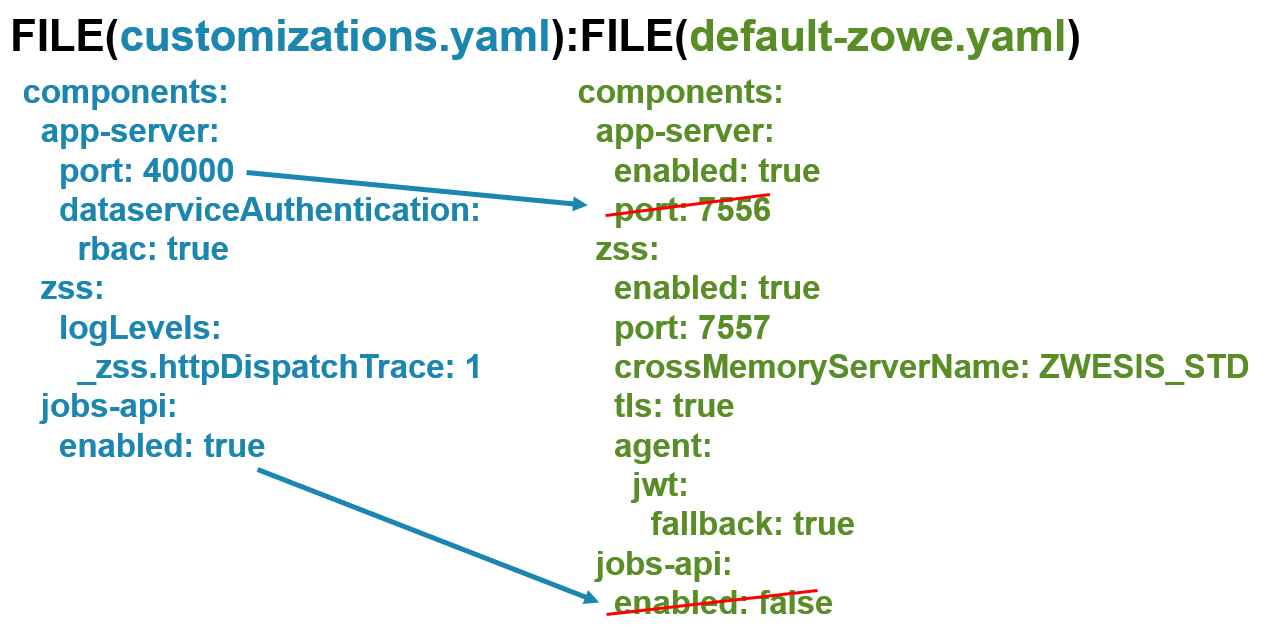 Templates are resolved after merging files, but before schema validation occurs, so you can split up your configuration into multiple files and template them however you'd like if the merged, resolved result is valid against the Zowe configuration schema.

To make a template, you use the syntax ${{ assignment }} in which there must be a space after ${{ and before }}. The assignment can be a ECMAScript 2020 statement, such as a JSON path or a conditional. Here are some examples of templates that you can use to simplify your configuration: 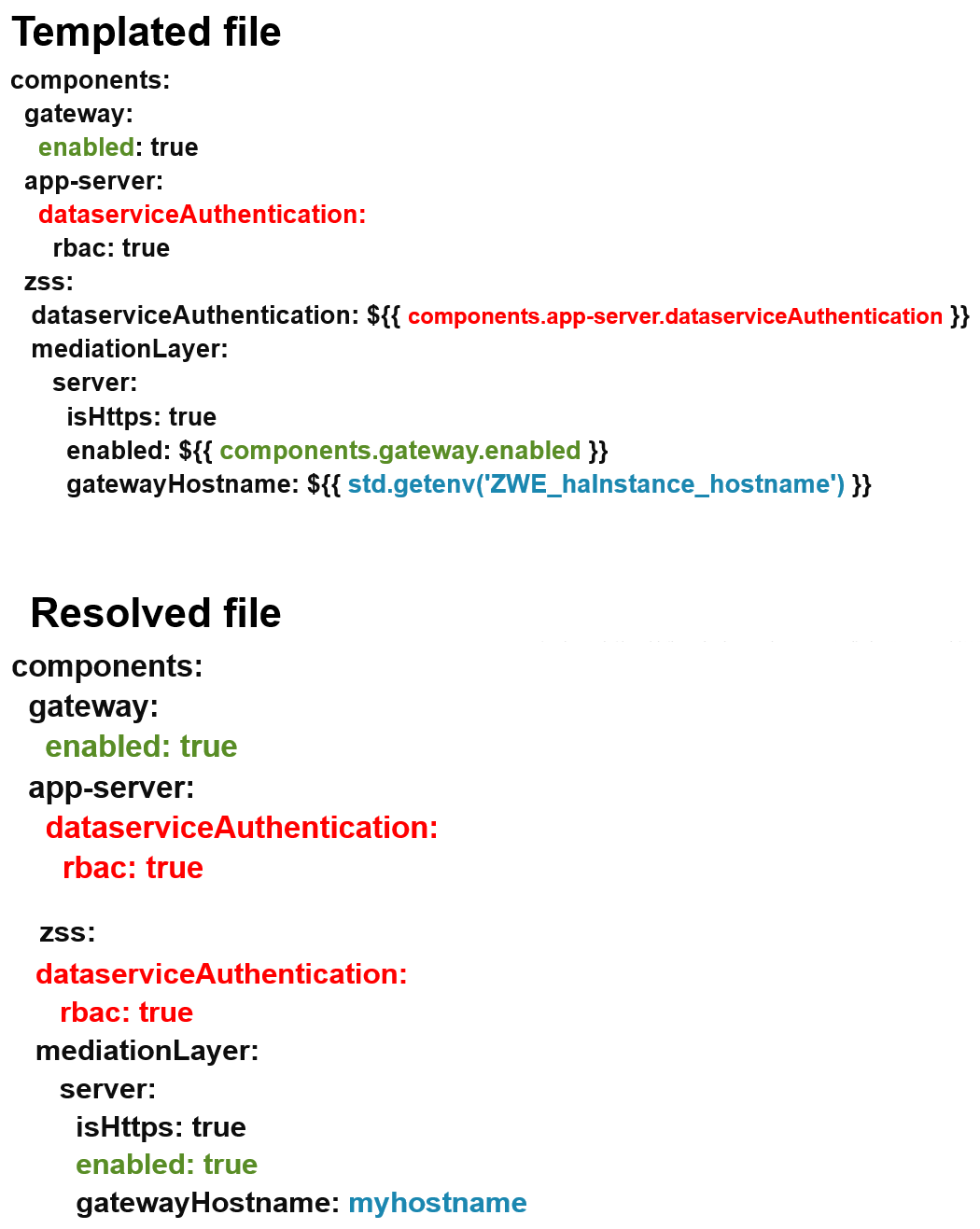 configmgr is a file located within <zowe.runtimeDirectory>/bin/utils in the Zowe server component runtime for z/OS. If you run it with no arguments, it prints a help command that details what you can do with it. configmgr commands focus on providing input files and schemas, and then providing output such as validation success or printing the configuration.

The configmgr executable needs the following as input:

The configmgr executable can do the following with the input:

The configmgr binary does not need to be used for Zowe configuration and Zowe schemas alone. It can validate any YAML against any json-schema. However, its environment variable output list is in the Zowe format.